Looking back on 2021, there is much that we are proud of and grateful for – such as the success of another Breakfast of Corporate Champions event, honoring CEOs and companies that exceed the national average of board seats held by women and are leading the way to parity by 2025. We are grateful for another year of uplifting and championing women’s education through our Education Fund, providing women with the opportunity to pursue a bachelor’s degree and complete their college education. We are so proud of our Forum Members who are changing the game in all sectors from business and media, to technology and healthcare. And most importantly, we are so grateful for the Women’s Forum of New York’s sisterhood and support to advance women’s leadership and create a more equitable future!

Happy new year! We look forward to another year of great achievements. 💙💚

Forum members Maria Torres-Springer, Vice President, US Programs, Ford Foundation and Sheena Wright, President & CEO, United Way New York City, were announced by Mayor-elect Eric Adams as top lieutenants in his administration, being appointed to NYC Deputy Mayor positions. The Ford Foundation’s Maria Torres-Springer was appointed Deputy Mayor for Economic and Workforce Development. As the Vice President, US Programs at the Ford Foundation, Maria oversaw the foundation’s domestic programming for Civic Engagement and Government, Creativity and Free Expression, Just Cities and Regions, Technology and Society, Future of Work(ers), and Gender, Racial, and Ethnic Justice. Sheena Wright was appointed Deputy Mayor of Strategic Initiatives. For the past 9 years, Wright has led the United Way of New York City as President & CEO, developing initiatives to help New York City through the pandemic.

On Jan 1st, our Forum members joined the women-led team to help revive a city still reeling economically from the pandemic.

“I am deeply humbled to have the opportunity to serve the city again as Deputy Mayor for Economic & Workforce Development and to do so with these extraordinary women leaders.” – Maria Torres-Springer

“I am so honored and grateful for the years that I could be of service through United Way of New York City,” Ms. Wright commented. “I look forward to working together in my new role to make New York an even better place to live.” – Sheena Wright

Two of our Forum members, Sallie Krawcheck, Co-Founder & CEO of Ellevest and Susan McPherson, Founder & CEO of McPherson Strategies were recently listed in Worth Magazine’s, The Worthy 100, a list showcasing over 100 entrepreneurs working to make a serious impact both personally and through their businesses. Our members on this list were featured alongside entrepreneurs like Chobani’s Hamdi Ulukaya, Lava Records’ Jason Flom and digitalundivided’s Lauren Maillian, who live and breathe their life’s mission into their businesses. Both Sallie and Susan demonstrate that business truly is personal, as this year’s Worthy 100 show.

To read more about The Worthy 100, please visit HERE.

“To support and increase the presence of women in high level positions will require a shift from commitment to action. With that in mind, companies should give more women the opportunities to cultivate the skills necessary for such a role.” – Helen Aboah

Lauren C. Anderson, Former FBI Executive, Founder, L.H.D. LC Anderson International Consulting, joined the Board of Directors for a new public company, called ShoulderUp Acquisition Corp, a SPAC (Special Purpose Acquisition Corp). As the founder, entrepreneur Phyllis Newhouse, told Forbes in an article titled ShoulderUp Rings The New York Stock Exchange Bell, “ShoulderUp is to show women to be fearless.” ShoulderUp’s motto is “Stand Up. Speak Up. Shoulder Up.” The Board and Management Team is unique for its diversity and is comprised of three former military, two former FBI, and one former Minority Leader of the Georgia House of Representatives. ShoulderUp had the distinct honor of ringing the opening bell at the NYSE on November 22, 2021. In a noteworthy connection, it was Forum member, Edie Weiner, CEO & President, The Future Hunters, who introduced Lauren to Phyllis about five years ago.

Carla Harris, Vice Chairman, Global Wealth Management and Senior Client Advisor, Morgan Stanley, was honored to headline Holidays from Harlem with Carla Harris and Friends with fellow singers from the Morgan Stanley family from around the globe as a part of their annual fundraising concert. Originally performed to sold out audiences at the historic Apollo Theater in Harlem, NYC, the show pivoted to a virtual format last year, becoming Holidays From Harlem with Carla Harris and Friends. Support of the virtual concert benefited New York-Presbyterian Children’s Hospital, Johns Hopkins Children’s Center, and the Chicago Grow Clinic at La Rabida.

To learn more about the Economic Development Power 75 and the individuals featured on this list, please visit HERE.

Ann Sarnoff, Chair & CEO, WarnerMedia Studios and Networks Group, was named in Forbes newly released “The World’s Most Powerful Women 2021” list. The list reflects the change that has occurred in the world. The state of female power has changed, with women gaining ground in the c-suite. Forty CEOs are featured on this list, the most since 2015. Sarnoff was named Chair and CEO of WarnerMedia Studios and Networks Group in August 2020 and oversees all of WarnerMedia’s content-focused teams, including the Warner Bros. Pictures Group, HBO and HBOMax , Cartoon Network, TBS, TNT, and Warner Bros. Television Group.

Introducing The Bulletin Board section, where you will find open job positions and special offers or promotions presented by fellow Forum members or friends of the WFNY community. Please submit any aforementioned content before January 20th to be included in the next member newsletter to najapazant@womensforumny.org. 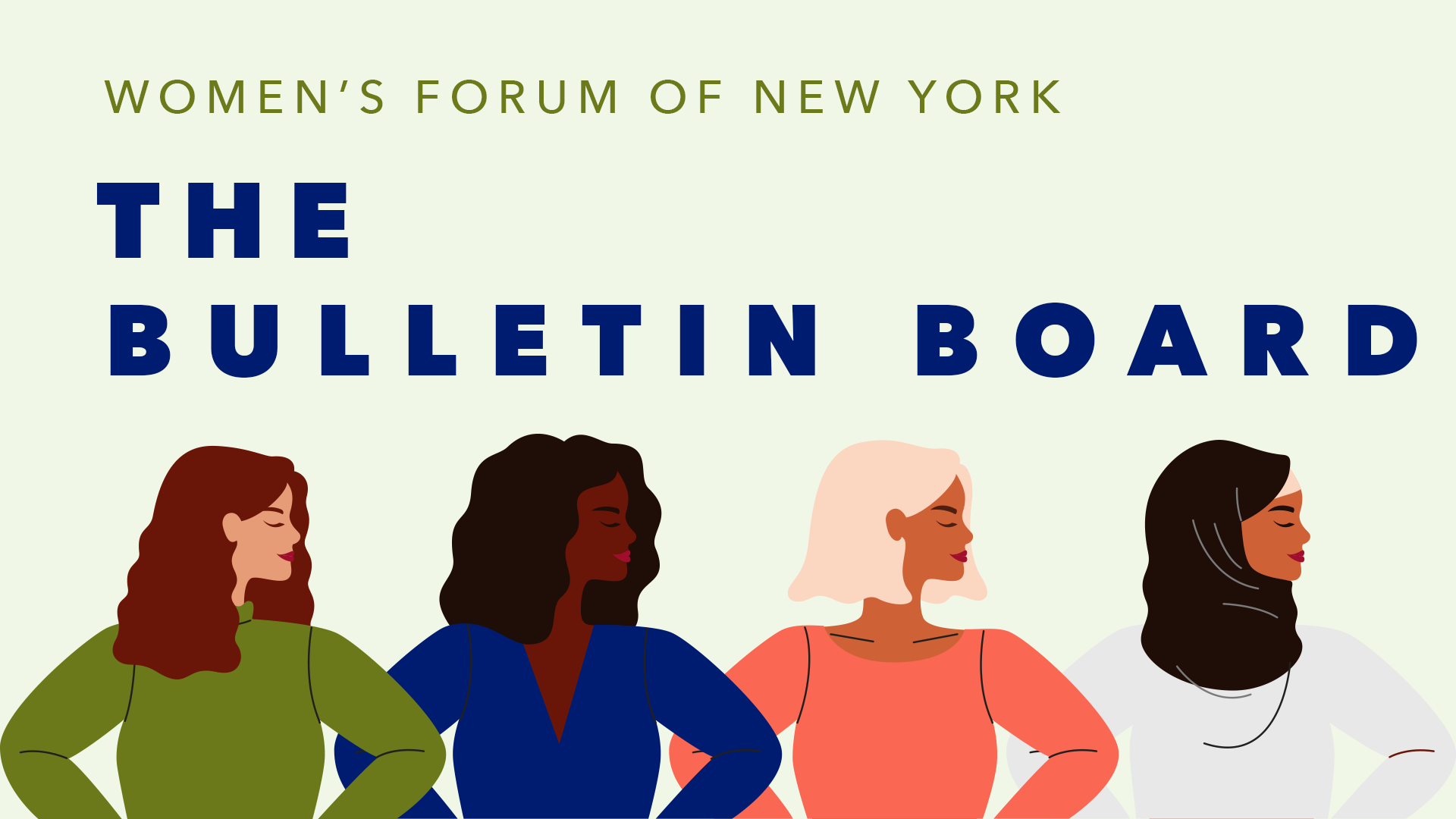 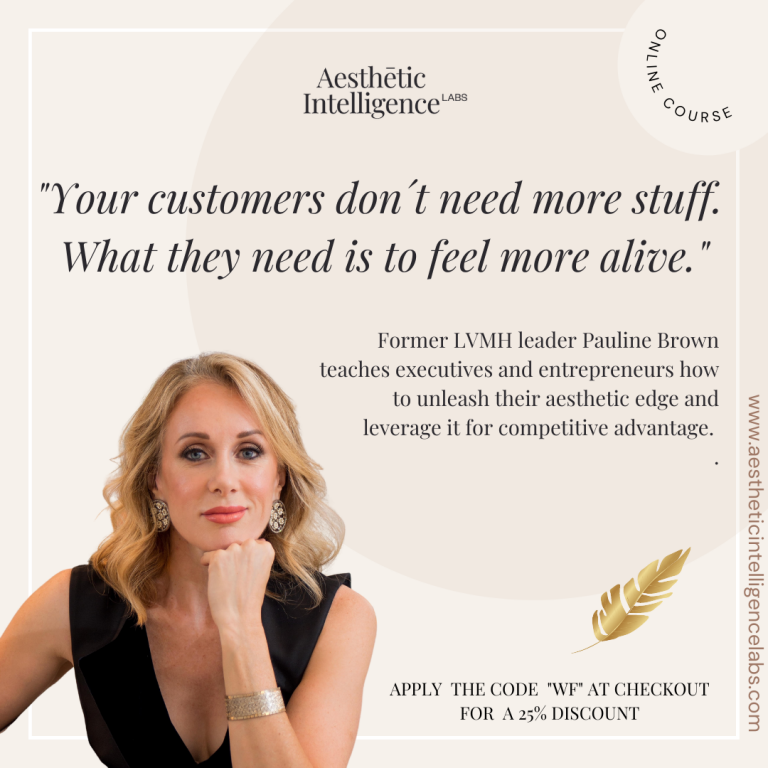 Last year, the Women’s Forum of New York had the pleasure of holding a virtual talk with longtime luxury goods leader and former head of LVMH North America, Pauline Brown. Brown has launched a groundbreaking new online learning platform called Aesthetic Intelligence Labs (A.I. Labs.) The platform teaches businesspeople how to harness the power of their senses, refine their tastes, and apply them to building brands that stand out, careers that thrive and businesses that last.

The program consists of a series of master-classes taught by Pauline as well as individual exercises, curated content, interactive workshops, and a global community of participants, including entrepreneurs, brand marketers, product developers and other professionals.

Pauline is offering a 25% discount special for our Members. Just apply the code “WF” at checkout. The course kicks off on January 19th at 12pm (EST) and registrations are open until then.
For further information, please contact Paula Oriol: paula@aestheticintelligence.com

Our #WBW interview series was born out of the same principle that is at the heart of the Women’s Forum – uplifting women. Our #WBW interviews allow women to discuss their professional journeys and provide great advice to other women looking to advance their careers and embark on the path to entrepreneurship. We have had the pleasure of interviewing Forum members- Sarah Kauss, Patrice Tanaka, Deirdre Quinn, Mijong Lee, Sarah McNally, Gina Gibney, Tracy McKibben, Rohini Dey, Lori Tauber Marcus, Susan McPherson and most recently, Gloria Feldt. Stay tuned for our upcoming Women in Business Wednesday interviews with Forum members Ilene Wachs, President, Horizon Casualty Services, Inc., Horizon Blue Cross Blue Shield of New Jersey and Ruchi Kotahwala, Founder, Ruchi New York.
To read or watch our past Women in Business Wednesday Interviews, click on the links below: Are you or someone you know interested in sharing experiences as a business owner or entrepreneur? If you are interested in sharing your story, please email najapazant@womensforumny.org . The Women’s Forum Credo is ”Women helping other women never gets tired.” Imagine how many women in our communities, and beyond, you may help just by sharing your experience! Head on over to Instagram @womensforumnewyork to view our interviews and like our posts.

Please submit newsletter content before January 20th to be included in the next edition. Submissions and corresponding media/links can be submitted below, in your “My Participation” section of your member portal HERE, or you can reach out to Communications and Social Media Manager Naja Pazant at najapazant@womensforumNY.org. Also, if you’d like to share newsworthy accomplishments and updates with the IWF community, please reach out to Communications Manager Lauren Williams at lwilliams@iwforum.org.